If you cut your hand in 21st century Britain, you’d be fairly surprised if someone seized it and started chanting verse about Judea, Jesus, the Holy Ghost and Bethlehem. You’d think a) that’s no substitute for Savlon and a packet of plasters and b) how extraordinarily devout. And yet for much of the 16th and 17th centuries, what sounds like a prayer to modern ears would have been seen as evidence of a pact with diabolic forces. Just a few miles north over the border in Scotland, it could have had you burnt at the stake1.

In the third quarter of the 19th century, this charm2 was found END_OF_DOCUMENT_TOKEN_TO_BE_REPLACED

Six hundred years after the death of a wild man in the woods of southern Scotland, Geoffrey of Monmouth assembled some scraps of poetry written in the intervening years and added him to his History of the Kings of Britain as King Arthur’s right-hand man, Merlin.

Merlin and Arthur by Gustave Dore

There are several different sources in old Welsh literature for Myrddin, or as we usually spell it, Merlin. Some, referring to events in Wales itself, mention Merlin Ambrosius or Merlin Emrys, and these took place at the end of the Roman era. Others were linked to the Cymry of northern Cumbria, entangled as a by-line in the story of the Battle of Arthuret, which took place a couple of hundred years later. This Merlin was Merlin Wyllt, or Merlin Silvestris, or Merlin ap (son of) Madog Morfryn. END_OF_DOCUMENT_TOKEN_TO_BE_REPLACED

Whilst I cook up some new spooky posts for Samhain, I thought you might like to revisit the oldie-but-goody spooky posts previously explored by Esmeralda!

How about Armboth: Cumbria’s Most Haunted : the story of a drowned bride, poltergeist-type activity and spectral lights at the house under Thirlmere. END_OF_DOCUMENT_TOKEN_TO_BE_REPLACED

Midsummer isn’t much celebrated in Britain these days. There are a few revived festivals around – in Cornwall, especially – but most people’s ‘celebration’ is restricted to a TV news clip of folks at Stonehenge having a knees-up, courtesy of English Heritage.

Most of Britain’s midsummer festivities – including Cumbria’s – were dying out by the end of the 17th century1, although there is evidence that they lingered in the north of the county into the mid 19th century2. END_OF_DOCUMENT_TOKEN_TO_BE_REPLACED

Is it true that every pleasure has its price? Certainly, it’s not unusual for people to assume that if you live in Cumbria, your life out-of-season must be made a misery by the weather. It’s true, it rains a lot – that’s where the lakes come from! – but up here on the east Fellside (the Cumbrian side of the Pennines), we have another little trial. The Helm Wind. 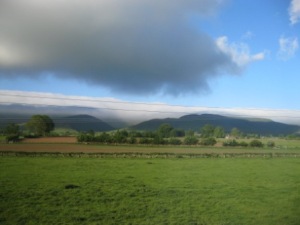 Whilst plenty of folks across eastern Cumbria claim to get the Helm Wind, in fact, they don’t. The whole area can get a fairly strong north-east wind, but only a little strip about 20 miles long and two or three miles wide, extending from about Renwick to Warcop, actually gets it. This is a wind that roars incessantly for two or three days at a time, blowing over walkers and sheep, ripping roofs off, tearing up trees and burning leaves into blackened, scorched rolls. END_OF_DOCUMENT_TOKEN_TO_BE_REPLACED

The Alchemist by Fettes Douglas, 1853

It’s a shame that people don’t generally know much about Michael Scot. Scratch around a bit and you might find someone who can drum up fantastical tales about turning witches into stone at Long Meg stone circle, raising a church overnight, or casting down mountains. Historians will tell you that he was a translator, alchemist, astronomer and early scientist, who lived around the turn of the 13th century.

Scot was probably born in the Borders, but he spent most of his life abroad, retiring to Holme Cultram Abbey in northern Cumbria1. There are 17th-century reports that he was buried there, and  that some of his works were kept in Wolsty Castle. END_OF_DOCUMENT_TOKEN_TO_BE_REPLACED 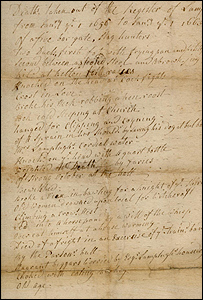 According to a document from the village of Lamplugh, in west Cumbria, mid 17th– century parishioners were battling a plague of faeries, witches, will ‘o the wisps, man-eating dogs, fatally strong beer and spontaneous brawling. The document describes itself as a register of deaths for the period 1656 to 1663, and includes the following causes of death:

Two duels, fought with a frying pan and pitchforks – 1

Frighted to death by faries – 42

Old women drowned upon the trial for witchcraft – 34

The Spital Inn at Stainmore was in an interesting location. A completely wild part of the country even now, it was for centuries the main route into the Eden Valley and northern Cumbria. During the eighteenth century, the Spital Inn was a crucial part of the long-distance coaching route, and was the place where the national mail coach 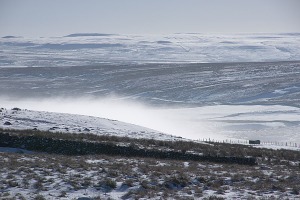 changed horses before heading down the hill in either direction.

At some point at the end of the eighteenth century – possibly 1797 – the innkeeper, George Alderson, was preparing to settle for the night when an old lady appeared at the door and asked if she could sleep by the fire. Alderson was not a man to turn the needy away, so he assented but asked his maid Bella to sleep downstairs, too. END_OF_DOCUMENT_TOKEN_TO_BE_REPLACED