If you live on this island at the moment, there’s no avoiding a certain debate about the land that lies at its northernmost end. It’s a particularly odd moment for Cumbria, as we share a border with Scotland and indeed for large chunks of its history, large chunks of Cumbria actually were in Scotland. I could wade through a list but perhaps this is best exemplified by Carlisle Castle; the ‘mighty keep’ (tower) was built by King David of Scotland and he died right here in 1153. 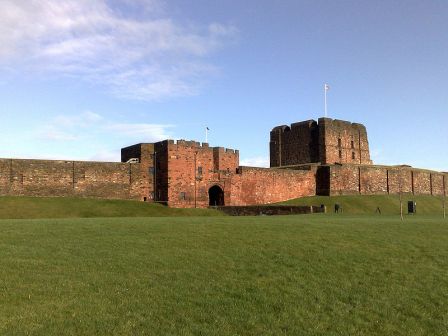 It’s made a lot of us think about how we define ourselves. Like many people around these parts I’m a real northwestern mongrel, with a mixture of Cumbrian, Irish and Scottish blood, names, appearance, and history. I’ve drawn the conclusion that I should side-step recent history – by recent I mean several hundred years’ worth – and decide that I’m British.

‘Britain’, of course, is as Tim Clarkson says in this excellent post, not a political entity but an historical one, describing an island off mainland Europe. That’s the whole island, north to south, east to west, and it includes a whole bag of ethnic micro-identifiers, ancient and modern.

I can even claim Camden, the 16th century historian, in evidence. In the wonderfully lyrical first English translation by Philemon Holland of 1610 – perhaps, appropriately, Camden’s 1586 original was not written in English or Welsh or Gaelic but Latin – Cumberland remembered it was peopled by Britons long after everyone else had adopted other labels.

‘Westward, Northward from Westmoreland lieth Cumberland, the utmost region this way of the Realme of England, as that which on the North side boundeth upon Scotland. On the Southside and the West the Irish sea beateth upon it, and Eastward above Westmorland it butteth upon Northumberland. It tooke the name of the inhabitants, who were the true and naturall Britans and called themselves in their owne language Kumbri and Kambri. For the Histories testifie that the Britans remained heere a long time, maugree [despite] the English Saxons, howsoever they fretted and stormed thereat: yea and Marianus himself recordeth as much, who tearmed this Country Cumbrorum terram, that is, The land of the Cumbri, or Britans, to say nothing of the places that everywhere here beare British names, as Caer-Luel, Caer-dronock, Pen-rith, Pen-rudocc, &c., which declare the same and as cleerely proove mine assertion.’ (William Camden’s Britannia, 1610 Philemon Holland translation, opening part of entry for Cumberland.)

(North-west of Westmorland is Cumberland, the furthest part of England, which borders Scotland. In the south-west it meets the Irish Sea, and to the north-east, Northumberland. It is named after its inhabitants, who were the original Britons, who called themselves cumbri. History says that the Britons were here long after the anglo-saxons arrived. Marianus [an 11thcentury writer] said this, calling it land of the Cumbrians, or Britons, and also there are British place-names everywhere, such as Carlisle, ***, Penrith and Penruddock, which proves my point.)

The word, ‘Cumbria’, as we all know (after three years of Esmeralda’s!), is from the same brythonic language root as the Welsh cymru and cymry, the Welsh words for Wales and Welsh. It’s usually translated as ‘fellow countrymen’ or, as I like to think of it, ‘people like us’. Everyone on this island spoke a dialect of that language when the Romans arrived, and it was gradually pushed back by successive language invasions from variants of anglo-saxons and to a lesser extent, gaelic speakers. Now the remnants of the language of the Britons are to be found in Wales and Brittany and a scattering of enthusiasts in Cornwall. Cumbria retains it in the oft-quoted sheep-counting dialect (‘yan, tan, tethera’), but we spoke it to some extent until the 10th century, well after the pesky anglians started putting their oar in.

I’d like to think that Camden was particularly keen to include these facts because despite being born and bred in London, he knew that, ‘Wirkington, a place famous for the taking of Salmons, and now the seat of the ancient family of the Curwens… heere have they a stately house built Castlelike, and from whom (without offence of vanity be it spoken) my selfe am descended on my mothers side’. I’m also descended from Workington on my mother’s side (albeit not via the Curwens) and it seems we feel the same, 400 years apart.

Whatever whoever wants to call whichever part of the island of Britain after The Vote, I know one thing. Cumberland will hold as true to its Camden/Holland description as it ever has.

‘…although it be somewhat the coldest, lying farre North, and seemeth as rough by reason of hilles, yet for the variety thereof it smileth on the beholders, and give contentment to as many as travaile it. For after the rockes bunching out, the mountaines standing thicke togither, rich of mettal mines, and betweene them great meeres stored with all kinds of wilde-foule, you come to prety hills good for pasturage and well plenished with flocks of sheepe, beneath which againe you meet with goodly plaines spreading out a good way, yeelding corne sufficiently. Besides all this, the Ocean, driving and dashing upon the shore…

Roll on Cumbria, land of the Britons. 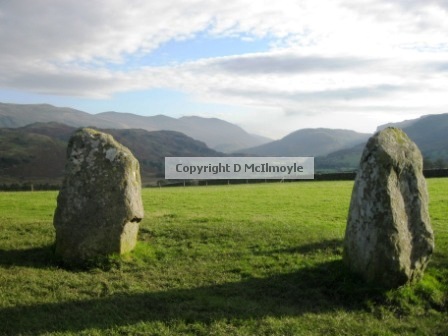 1. This is not part of the political argument, and I have no view on whether Scotland’s political future should lie within or outwith the UK. People bringing politics to Esmeralda’s will be subject to the usual punishment of defenestration.

2. The Camden quotes are all from the first English version, translated by Philemon Holland in 1610. Isn’t his language marvellous? The spelling and punctuation, with all its idiosyncracies and inconsistencies, is Holland’s original.

Cumbria has a lot of pretty unusual stuff, and has precisely 66.67%(1) of these fork-like items. The other 33.3% are in Ireland, and there’s every chance that even they were made here.

I honestly don’t think anyone knows who’s going to read their blog until they get writing it. This one is mostly read by folks with a storytelling bent, whether it’s a local with a romantic soul, a teacher or volunteer guide looking for history’s interesting bits, a journalist, a whole load of spammers telling tales about loans and boots and yachts, a writer of novels, a politician, an historian, a neighbour, or a lover of the discipline of local history, wherever it is found.

If you love stories, I can’t recommend a better source of inspiration than END_OF_DOCUMENT_TOKEN_TO_BE_REPLACED

Yesterday, Dr Tim Clarkson, who has been kind enough to dig me out of many a comprehension hole without making me feel stupid, got a slot on the Mike Zeller show on BBC Radio Cumbria.

Tim Clarkson is an expert – possibly the expert – on the kingdom of Strathclyde, that is to say, the Brythonic (early Welsh)-speaking, ‘dark age’ kingdom that stretched from Glasgow to northern Cumbria, including the sub-kingdom of Rheged, between roughly the 5th and 10th centuries.

You can hear Tim’s bit on the radio show for another 6 days on the BBC i-player on the internet. (Slide the slidey thing along to 48mins 10 seconds to reach this bit).

The meaning of the word, Cumbria and its predecessor, Cumberland, and its ancient links to Wales (home of the ‘cymry’).

The language of Cumbria up until the Norman invasion, which was Cumbric, a dialect of Brythonic, itself a version of early Welsh.

Rheged – here is a guest blog piece on early medieval Cumbria  (he’s not that keen on the locating of Rheged in Cumbria, or at least, not all of it) that Tim Clarkson was kind enough to let me filch from him for this blog.

Urien – the 6th century Cumbria ‘hero’ who led an alliance of northern, Brythonic-speaking kingdoms against the invading Angles, but lost in the end when he was betrayed by an ally.

The Battle of Arthuret – which is the story of Gwenddoleu, and his bard, Lailoken.

Merlin – or, at least, one of the historical bards known as Merlin – who was, in fact, Lailoken.

You can buy Tims’ books here. Support our supporters!

Since I last visited Tullie House in Carlisle to view the Crosby Garrett Helmet1, a curator’s comment has stuck in my head. There was a lot of controversy about the helmet, found by a metal detectorist in a field in the Eden Valley; some of it is worthy and true, and a lot of it is unmitigated codswallop and it’s the curator’s musings on the codswallop that caught me. He said he thought the root of some people’s determination to disbelieve that the helmet was found right here, as validated by a pukka archaeological dig and tentatively linked to a bona fide Roman fort at Carlisle, is that they just don’t believe that anything special – never mind exceptional – could be found right here in Cumbria.

In a similar vein, people have long imagined that END_OF_DOCUMENT_TOKEN_TO_BE_REPLACED 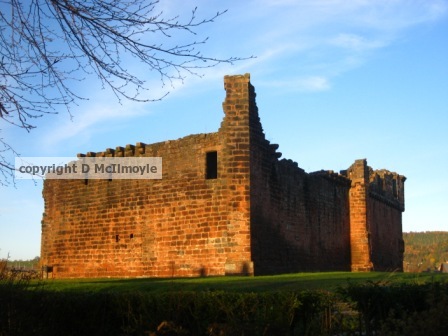 I would have been happy to tell you about Penrith Castle last year, if it wasn’t for the fact that there was a point when I was being hounded by various members of local press and radio anxious to establish that St. Andrew’s Church in Penrith should be putting in a bid to be the burial-place of the newly-disinterred Richard III. Now, I like to make my historical connections as much as the next gal, but I do not get into that kind of politicised argy-bargy.* However.

Penrith is an interesting castle. It’s not really on the END_OF_DOCUMENT_TOKEN_TO_BE_REPLACED

I shouldn’t say this1, I really shouldn’t2, but when it comes to Romans I sometimes feel Cumbria was a bit short-changed. I mean, we have a whopping great wall3 (well, half of it), numerous forts4, Roman roads and so on – but where’s the fancy stuff? Where are the villas with mermaid mosaics and painted plaster? I know I should make a virtue out of misfortune and assert that we have Real Roman Life, not some over-fed Roman fat cats poncing about with amphorae of wine… but still. You need imagination and learning sometimes to make sense of Cumbria’s slightly-straighter-than-expected roads5 and bumpy fields6. I start to envy Northumberland’s piles of old Roman shoes7 and notes about END_OF_DOCUMENT_TOKEN_TO_BE_REPLACED

Whilst on my travels in York recently (I do leave Cumbria occasionally) I came across this in the Yorkshire Museum.

The Ormside Bowl was found near St James’ Church in the village of Great Ormside in the Eden Valley in the early 1800s. The circumstances of its discovery aren’t clear; it was long assumed it was found buried, but at least one archaeologist1 has suggested that the condition is too good for that to be the case.

It’s really two bowls fastened together. The outside, the oldest part, is made of silver-gilt and dates to the mid 8th century. The inner part END_OF_DOCUMENT_TOKEN_TO_BE_REPLACED