The official line on St. Bega1 is that she was the Irish princess in whose name St Bees’ Priory was founded. Bega decided at an early age that she would devote her life to the church, whereupon an angel gifted her a holy arm-ring as a symbol of her dedication to Christ. Needless to say, Bega was also a very beautiful Irish princess and she was soon in demand for marriage and her father, an Irish king, accepted the proposal of the King of Norway. This was the last thing Bega wanted, so whilst the kings were feasting, Bega used her arm-ring as a magical key to open all the castle’s locks and she escaped across the Irish Sea. She landed near the Cumbrian promontory that is now St. Bees Head and lived a hermit’s life in a hut on the sea shore.

Perhaps the best-known story about Bega is how she came to own the land upon which her priory was built. There are two versions of this tale. The commonest-heard is that Lord Egremont said she could have all the land covered by snow on Midsummer’s Day; of course, it snowed on St. Bees Head on that day. Bega’s life of peace and devotion was shattered with the arrival of the vikings. On invitation from Oswald of Northumbria, she fled her hermitage and crossed England to take her vows at Hackness Priory, near Scarborough. In the 12th century, her body was discovered and translated to Whitby Abbey.

Over the next hundred years ago, a series of nine Bega-related miracles took place in Cumbria. These were recorded by the brand-new Priory of St Mary and St Bega, which was established at St. Bees under the sponsorship of St Mary’s Priory of York in around 1120. One of these is an earlier version of the tale of unseasonal snow, but this one has a ring of reality about it. Ranulf le Meschin,2 the local landowner, fell into a dispute with the monks about boundaries. On the day the bounds were to be settled, snow fell everywhere around except for the headland at St Bees where the priory lay. Anyone who lives near any British coastline – never mind St Bees – will know that it’s not that unusual for a strip of land near the sea to escape the worst of the weather.

The priory had a famous relic, an ancient arm-ring or bracelet, inscribed with a cross, which they believed once belonged to Bega herself. The description from the days of the priory sounds very much like the three arm-rings found in the Cuerdale Hoard3, from Preston; each silver ring is made to fit the upper arm and carries a saltire cross at the widest part. They are Norse viking and have been firmly dated to before 910CE. People gave money to the priory in the name of the ring and many important oaths were sworn upon it in much the same way as people swear oaths upon a bible. The priory lost the arm-ring in a Scottish raid some time in the early 1300s. 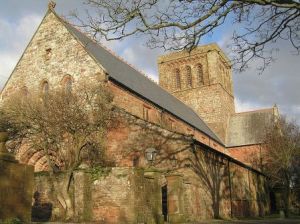 And here is the difficulty. In the 1860s, William Bell pointed out that the name, Bega, could be derived from the Old English word for ring: beāg. As people became more interested in pre-christian religions, the story grew. Vikings used arm-rings for oaths sworn in pagan religious and legal ceremonies.The ring ‘…should lie on the altar of every major temple.: a ring every chief should have on his wrist…and which he should hold and redden in the blood of an ox that he has sacrificed there himself. Every man… should take an oath by that ring and invoke two or more deities.’4

It is a fact that Irish-Norse people settled in West Cumbria in the 10th century.5 There is a gap between Bega’s lifetime and the writing of the Life in the mid 13th century, in which all manner of facts could have been forgotten or changed. St Bega’s Well6 is opposite the reputed remains of a St Michael Chapel (St Michael often having been called in to christianise pagan sites). She had nine miracles – nine being a holy number in Norse pagan culture – and according to the Life, she died on 31st October, that is, Halloween, or the pre-christian festival of Samhain. Therefore, according to supporters of this theory, this is another example of christians appropriating a pagan religious site/relic and/or holy person.

I have to divert here. When I was an undergraduate umpty years ago, we had to sit a module called, ‘The history of history’. This is because, contrary to common thinking, our understanding of history changes. Sometimes this is due to fashions in thought, and sometimes it’s a result of new discovery – historical, and, increasingly, archaeological – or new analysis. This is why, whilst I collect antiquarian editions of folklore, all my history books are as modern as I can get, and I bug academic friends for unpublished, brand-new papers. If you don’t do this, you’re in danger of promulgating that poisonous combination of Chinese whispers and wishful thinking that comprises much popular history, especially in remote regions like Cumbria.

Unfortunately, the more we look into Bega the more the ‘appropriated pagan’ theory falls down. It requires Bega, or the person with the 9th/10th century beāg, to arrive in Cumbria with their pagan Norse viking ideas, probably in the earliest wave of Norse settlement on the Cumbrian coast in the years after 902CE – although recent analysis suggests that these ex-Dublin vikings may have been christian by this point.7 She presumably cannot have been an Irish princess, either, or she would have been christian. This line of thought also requires the Life of St Bega to be largely incorrect, as many of the dates precede the appearance of vikings in Ireland and Cumbria: it mentions Bega’s link to Oswald of Northumbria (604-642 CE) and conflates her with a Hackness nun, St Begu (d. 660CE), who was mentioned by Bede (673-735CE). I should add that’s entirely possible that the Life contains nonsense as it was written in the mid 13th century, centuries after whichever death date you choose, but if you’re willing to discount parts of the Life on those grounds you can’t then insist that other aspects listed there must be correct.

More damningly, ‘the Old English word beāg cannot be easily reconciled to any known spelling of Bega’8 and, for heaven’s sake, it’s Old English, not Old Norse, not Irish Gaelic, and not Brythonic, or the language of any other of the contemporary players. In fact, the oldest spelling of ‘Bega’ that we have is in a 12th century charter and it uses quite a different word: it called St. Bees, Kirkebibeccoch. A signatory to the foundation of the abbey is a certain Gospatic Gillebecoc and the village was still Kirkby Becoc at the Dissolution. Becóc is a personal name seen elsewhere in the Gaelic/Celtic world and the -óc suffix is a diminutive added to names within the Celtic church. The Gaelic Becóc is not the Old English beāg.

Even that sexy date for her feast – 31st October – falls down. The Life said that was her date of death, and it’s often repeated that this was her saint’s day. It’s not, unfortunately. A manuscript that once belonged to the priory’s mother-house, St. Mary’s of York, was found in the Bodleian in the late 20th century and it states very clearly that the feast day was 7th November.

So where does that leave us? It appears that Becóc is probably a person, not a ring, and she may well have been Irish, and singled out by the Celtic church in the 7th century. If she is the same as the Begu mentioned by Bede, she wasn’t fleeing Norse vikings, and she wasn’t the owner of that Norse arm-ring venerated by the priory dedicated to her five hundred years after her death. There is no evidence of a pagan cult in her name in Ireland, and, indeed, we have nothing  to track her between her life – whenever that was – and that 12th century place name. And if, on the other hand, she was fleeing the vikings, why does she have that piece of viking jewellery? And if she was a Norse viking, what is she doing with an Irish name given the pet treatment by the early Celtic church? As for the arm-ring itself,  it need not be a pagan artefact, as the saltires on the Cuerdale examples suggest. But then, what the heck was a christian monastery doing flaunting the oath-swearing powers of an arm-ring, anyway, when it presumably had bibles to hand?

Personally, the only way I can assemble the information into one person is to suggest that Becóc was indeed an early christian from Ireland, whether or not she ended up in Hackness. As for the arm-ring? I can easily imagine the founders of the 12th century priory digging it up and believing fervently that it was St. Bega’s, and a sign of her blessing. And a great way to fame and fortune.

But, she doesn’t entirely fit anyone’s agenda. And I quite like her for that.

PS. Like many of my friends, I love the ‘aha’ moment when we find remnants of ancient, pre-christian history and I’m sorry this isn’t another one. I suggest popping over to the more rewarding posts featured under ‘Cumbrian gods and goddesses’ (look in the right hand column!).

Please note: if you’re interested in the subject, please enjoy reading the sources as I do. But if you then write about it, it’s good manners to mention a) them and b) that you got them from me. Thank you.

St Bega – Cult, Fact and Legend by John M Todd, Transactions of the Cumberland and Westmorland Antiquarian and Archaeological Society, 1980.

St Bega – myth, maiden or bracelet? An Insular cult and its origins by Clare Downham, Journal of Medieval History 33 (2007) pp33-42

Religious and Cultural Boundaries between Vikings and Irish: the Evidence of Conversion by Clare Downham, draft article October 2012. Love the phrase, ‘salt water bandits’, by the way.

Some of you may enjoy the counter argument posited by Alex Langstone in his books, Spirit Chaser: The Quest for Bega (2012) and Bega and the Sacred Ring: Restoring a Goddess Archetype (2011).

46 thoughts on “Bega of St. Bees: the Irish princess, nun, or pagan relic?”