Whenever The Time Team‘s Phil waxes lyrical about flint knapping, arrowheads and axes, you can hear the TV audience willing the producer to hurry up. They just look like uninteresting flakes of dark grey stuff, which you often wouldn’t realise were anything special if you dug them out of your vegetable patch. 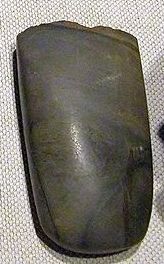 Langdale axes, now – that’s another matter. Made from greenish Borrowdale volcanic stone from the central Lake District, even the ‘rough-out’, unfinished axe heads look purposefully-shaped. The polished ones are amazing. They can be 11 inches long, with roughly parallel sides about 3 or 4 inches wide, an oval cross-section, and an almost glass-like sheen where they have been smoothed to perfection over many weeks.1 They are very hard, resistant to breaking, and often much bigger than their flint equivalents. There’s no mistaking these for natural stones; the skill and deliberateness of their manufacture sings down the millennia.

Six millennia. That’s right – some experts reckon that the Langdale axe production site may have started up in 3,800BCE2. Nearly six thousand years ago.

Langdale axes come not from the Langdale Valley floor, but from high in the mountains above it. An area roughly bounded by the Scafell range (including Scafell Pike, the highest mountain in England), Hardknott Pass (a high, dangerous mountain road), Wrynose Pass (not much better) and the Borrowdale Fells has a number of sites where there is evidence of axe-making. The stone wasn’t mined, but picked up in lumps from the scree – layers of loose stone piled up on mountain slopes and peaks. The axes were ‘roughed out’ to the right size, then taken down the mountains to be shaped more accurately and polished.

Pike O’ Stickle seems to have been the key production site. Like all ‘pikes’, Pike O’ Stickle has an oddly prominent shape. Its sides are almost vertical in places, and it rises to 709m (2326ft) before breaking suddenly into a shallow, domed top. The summit is littered with axe production debris, although please note that it’s illegal to remove anything!

All of the axe-making sites are difficult to access. They’re away from all main roads, and most minor roads. There are foot paths only in the places that the topography can accommodate; the same foot paths trodden by the axe-makers themselves. These mountains are high, but particularly on the western side, they rise straight from the very low valley floor, so they look even bigger. The views are sensational.

Langdale axes feel amazing. They are heavy, as you’d expect from a substantial piece of stone. They’re carefully weighted, too, with a thick section at the back, where you’d attach it to a wooden haft. It’s easy to imagine how the weight would shift in your hand as you brought the axe over your head to thump down into your target.

So what were they used for? Their date coincides with a period of substantial forest clearance, so that’s a good bet. They were also in production at the time that some of Cumbria’s stone circles were raised, and three examples were found in Castlerigg stone circle3. These weren’t just local tools, though; they have been found in quantities in the east Midlands, the Thames Valley area, Cornwall, Northern Ireland and even on the continent. In fact, when Professor Bill Cummins examined 1840 neolithic axe heads from all over England and Wales, he found that 27% of them originated in the Langdales4.

Given that Cumbria is hardly a great exporter now, this is surprising. But in the neolithic period, travel was much more difficult, and parts of Cumbria were exceptionally hard to access. Most trade came by sea to Cumbria’s west coast and inwards via the rivers – but the axes are more common on the east of the country, not the west. It’s possible that having been hauled down enormous mountains to valley-bottom communities for finishing, the axes were then taken over mountain passes to the Eden Valley and through the only old route over the Pennines – Stainmore, to the extreme northeast of the county – to the east. People must really have wanted these axes.

At this point it’s easy to conclude that the type of stone the axes are made from must be really rare, for people to go to this much trouble. But it’s not; it’s found in several parts of the country, many of which are considerably lower in altitude and easier to access.

A clue to their appeal comes from the condition of the Langdale axes that have been found. Some show signs of wear, but plenty show none at all3. Some seem to have been interred with the dead, or placed in watery ground, a common ‘sacrificial’ practice in prehistoric Britain (see this post on bog bodies).

Francis Pryor3, the esteemed archaeologist, says that some years ago, he would never have believed that the Langdale axes were anything other than a practical, highly effective and prized tool. Having further contemplated the evidence, he now believes that they had mystical associations. Langdale axes came from a very hard-to-reach area, and the stone had already been fractured into lumps – the scree – by the action of nature. The Pike O’Stickle is an odd, almost otherworldly, shape, and the views stretch down almost to sea level. This was a place where nature was writ large; perhaps it wouldn’t be too far to suggest that these axes were a gift from the gods to our neolithic ancestors.

I would also recommend Prehistoric Cumbria by David Barraclough.