It’s probably safe to say you’re famous if Errol Flynn, Clark Gable, Marlon Brando and Mel Gibson have all played you in blockbuster films. Fletcher Christian was born in 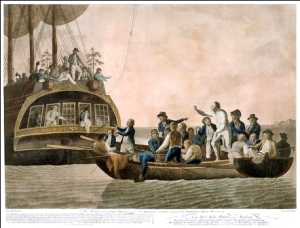 Brigham, near Cockermouth, where he went to school with the poet, William Wordsworth. Christian had travelled to India and twice with Captain Bligh to Jamaica before they set off on the ill-fated trip to Tahiti in April, 1789. Later that year, 1300 miles west of Tahiti, Christian led the mutiny on the Bounty. END_OF_DOCUMENT_TOKEN_TO_BE_REPLACED