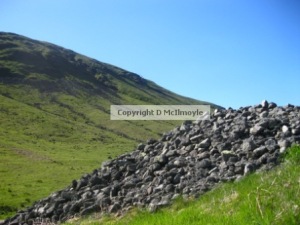 It’s remarkable that some pivotal events and figures in history are so little known. Oddly enough, everyone in Cumbria thinks they know about Dunmail. There’s the shopping centre in Workington; a Dunmail Close and a Dunmail Crescent; a guest house; a fantasy book character; until its recent sad demise, a rather tasty beer; and a brand of mattress. Some people might even mention Dunmail Raise, which is closer to the mark.

Dunmail Raise is a pile of stones in the middle of the road between Grasmere and Thirlmere. Not that long ago it was on the dividing line between the old counties of Westmorland and Cumberland, and had a wall over the top of it. There are no carvings, or fencing, or English Heritage signs: it’s just an unremarkable-looking heap. And yet, when the mountain pass was widened not all that long ago, the site’s ancient reputation ensured that the pile of stones was largely left alone. This is startling when you consider that similar road-widening efforts have led to the removal of stone circles and standing stones. END_OF_DOCUMENT_TOKEN_TO_BE_REPLACED