Did you get a gift for Valentine’s Day? I got two 70-year-old folklore books, a box of Fondant Fancies and a card. So, the first thing I did (well, maybe the second) was look up Valentine’s Day in my new book.

I was aware that our grandparents’/great-grandparents’ generation – in the extreme north, anyway – set little store by Valentine’s and regarded it as a bit common and certainly inconsequential. I’d no idea why, as my Jackie magazine insisted that we should be doing some sort of love divination whilst grooming our page-boy hairstyles and showering daily (Jackie was obsessed with showering daily. I’ve no idea why).

Many folklore books and doubtless websites would have you believe that Valentine’s Day was a Christian appropriation of the Roman festival of Lupercalia, but the idea of Lupercalia as romance starts to falter when you’re given an actual translation – it’s the Wolf Festival. It was celebrated in Rome between February 13th and 15th, but was probably much older; perhaps it was adopted by Rome because of Rome’s foundation legend of the boys, Romulus and Remus, who were suckled by a she-wolf, Lupa. The Wolf Festival actually involved sacrificing a couple of goats and a dog; the priests then ran around the city, naked except for the skin of the unfortunate goats, striking the outstretched hands of young women in the streets. The underlying objective seems to have been one of purification in anticipation of the shoots of a new spring and the birth of new lambs. In that respect, Lupercalia seems to have had lot more in common with Candlemas (February 2nd), which was originally the festival of the purification of the virgin Mary after Jesus’s birth, and the Irish traditions of Imbolc and St Brigid’s Day (February 1st), which coincide with the beginning of the lambing season. In southern Europe, mid February was seen as the beginning of Spring, although that seems rather ambitious in current-day Britain!

The catholic church recognises eleven saints called Valentine, three of whom were martyred on Valentine’s Day but that’s perhaps not surprising as it was a common name in the Roman empire. Two of these Valentines were killed in Rome, one a priest and the other, the Bishop of Terni. The third was martyred in Africa but no more is known. The earliest accounts of the acts of a St Valentine date to the 5th-6th century and state that Valentine tried to convert the Emperor Claudius II but failed. He was sentenced to execution, but healed the daughter of his jailer before he died. It’s only much later that a romantic element comes in when legends arose that Valentine was a priest who secretly married Roman soldiers who were forbidden to marry until they’d left the army. Whatever the case, the various church authorities have long been suspicious of making much of Valentine given the paucity of evidence, and there are no churches in Britain dedicated to him. His feast day was officially removed from the Roman Catholic Calendar of Saints in 1969.

The first known association with romance is noted about a thousand years after the death(s) of Valentine(s), in Geoffrey Chaucer’s Parliament of Fowles, dating to about 1381. This is our first mention of February 14th as the date on which birds choose their mates, and Chaucer’s birds argue about this. The English poet, John Gower, mentions the same lovelorn birds shortly afterwards. John Lydgate, in the early 15th century, talks birds and says in his poem dedicated to Henry V’s widow, Katherine that on this date, Englishmen ‘…look and search Cupid’s calendar, and choose their choice, by great affection’. Note that the earliest mentions are all birds; no humans. Hutton suggests that the transference to humans perhaps happened in the few decades between Chaucer and Lydgate. In February, 1477, Dame Elizabeth Brews sent a missive to John Paston, saying, ‘And cosyn, upon Fryday is Sent Valentine’s Day, and every brydde chesyth hym a make (every bird chooseth him a mate)’. Certainly, whilst they all mention Valentine, none say why Valentine, the 3rd century Roman, should have been romantic and there isn’t the faintest sniff of medieval swains running about naked except for newly-flayed goatskins. It’s all a bit of a mystery. 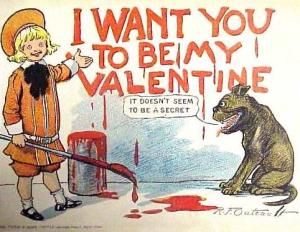 A more recognisable Valentine’s Day is recorded in the 17th century, when Samuel Pepys was just one source of a tradition that involved everyone’s name being written on a slip of paper – one bowl of girls’ names, and one of boys’. Each person would draw a name and give that person a gift – some sources say the names were drawn beforehand and the gifts given on Valentine’s, and some say that the names were drawn on Valentine’s and the gift given at Easter. Sometimes the papers had mottoes on them, such as ‘most courteous and most fair’. It wasn’t quite the ‘young lover’ festival of today, though, as Pepys records that one of his wife’s valentines was a young boy, ‘little Will Mercer… brought her name written upon blue paper in gold letters, done by himself very prettily, and we are both well pleased with it’.  Later in Pepys’ life, it became more of a set-up with Pepys arranging for the young man destined to be his wife’s valentine to deliver her a gift he knew she wanted, such as a rather special and expensive ring.

Oddly, these sorts of customs seemed to be restricted to the middle classes. Normally one might say that this could just be an accident of survival of records, but there are 17th century commentators who state flat-out that this was the case. Perhaps, as Hutton says, it was popular in ‘metropolitan culture’, where tradesman and professionals would be most populous.

The drawing of slips with names on it remained the usual Valentine’s gaiety in Northern England the Borders long after this, although the South and East of the country, curiously, were different. Here there are all sorts of records of something akin to Halloween ‘trick or treating’ without the tricks; youngsters called at houses for coins, cakes and small treats. This seems to be absent in the North. One wonders exactly what happened on these northern occasions, as it was seen as highly ‘vulgar’ as early as the 1720s.

‘Valentine’s Day is drawing near

And both the men and maids incline

To choose themselves a Valentine’

Valentine’s in a recognisable form arises in the md 18th century, when a fashion for ‘written compliments’ arose. These were often anonymous – a uniquely British feature – and slipped under the loved one’s door on Valentine’s Eve. ‘Charming Chloe,’ wrote one young man in 1760, ‘look with pity/On your love-sick swain’. (British Calendar Customs, p141)

By the 19th century, Valentine’s love letters had really taken off. In the 1820s, stationers started printing special stationery for romantic notes. In February 1825, the London Post Office handled an extra 200,000 letters compared to any other month that year. In the 1840s, hand-made cards began to be made in volume for people to buy, decorated with lace, satin and carefully-cut paper patterns. In the 1870s, cheap printed cards became available and so popular that in 1880, the Post Office handled 1.5 million of them. Sadly, it wasn’t all ‘roses and red and violets are blue’ as ‘the comic, the satirical… the vulgar and the offensive, which was rarely enclosed in an envelope and admirably suited for rousing the resentment of the recipient’ became increasingly common. “You’d open the card and a great long paper snake would unfold itself and instead of a nice greeting, there’d be a message like, ‘you are a snake in the grass'”‘. (Hutton, p150) There were also cards not dissimilar to ‘naughty’ seaside postcards, which must have been a real mood-killer for the late Victorian maiden hoping for something flattering.

‘Cards of this sort were popular enough with purchasers and detested enough by recipients to assist the passage of the whole custom into disrepute, and then into abeyance. By 1914, the sending of Valentine cards had become a rarity or died out altogether in every part of England and Wales’ (Hutton, p150). This is why our grandparents and great-grandparents were a bit equivocal about the whole business. Valentine’s were not quite respectable.

There was something of a revival in the late 1920s to ‘30s, the tone of which was captured by the events held in London hotels on Valentine’s Day, 1930. ‘At the Savoy, there were nearly 1,000 guests, and valentines, specially written to order, were distributed. At the Royal Palace Hotel, a valentine almost a century old, with Cupid in a petticoat, was an attraction. Men enjoyed wearing French top hats of scarlet, green, and gold, and women wore poke bonnets from Paris’. (Daily News, 15th February, 1930, quoted in British Calendar Customs, p143) Note that the guests were wearing fancy dress; the valentine’s ‘cards’ were hand-written notes, and the exhibit of honour was old. This revival consciously harked back to a period before the commercialisation, and popularisation, of Valentine’s Day which had happened at the end of the 19th century. This was nostalgia.

By the mid 1930s, printers were again making Valentine’s cards in volume and the Post Office issued special ‘Valentine telegrams’, a pre-printed form with a gold envelope. After the Second World War, commercial printers adopted the festival with gusto, and Valentine’s cards as slushy messages for wives, lovers and anonymous targets of affection became the norm.

And I bet not one of those cards has a wolf on it.

I used many sources but the key texts are:

The Stations of the Sun by Ronald Hutton (1996)

Oxford Dictionary of Saints by David Farmer (1997) (Note that other sources offer a variety of dates for the historical Saints Valentine from the 2nd century to the 5th. Farmer says 3rd, so that’s what I have used.)

A Dictionary of English Folklore, Simson and Stroud (2000).