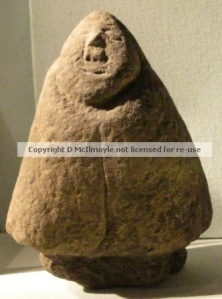 Picture time! See this fella? He’s a genius cucullatus, to give him his Latin name, but whether he was a Roman import or a native, his original owner wouldn’t have called him that. Genius cucullatus just means, ‘spirit in a hood’. This one, which was found at Birdoswald on Hadrian’s Wall, is the only one in Britain which is a single standing statue. They’re usually carved in relief on a flat stone, and in Britain, they are often depicted in groups of three.I wish it was simple matter to tell you what he represents, but that’s not possible. He’s often linked with a hooded deity of Greek origin, Telesphorus. The latter was a dwarf and son of Asclepius, the Greek god of healing, and is often depicted with a scroll to show how clever he is. Some scholars have thought that the Greek Telesphorus was adopted from the Galatians of Anatolia – who came from celtic Gaul (France) in the 3rd century BCE – but this is by no means certain. Our only other clue for the British examples is that it’s not unusual for examples found in southern England to hold eggs, which might mean that they are responsible for fertility or youth.

There are no inscriptions associated with a genius cucullatus in Britain, so there are no written clues as to his significance. This one was found at Birdoswald Roman fort, which was active in the 2nd, 3rd and 4th centuries. Other Cumbrian examples were found at other Roman forts – Carlisle and Housesteads. This might lead you to think that they are continental gods brought over by Roman soldiers, but it’s not that straight forward. Mabon, for example, was a popular deity along Hadrian’s Wall, and he’s very much a local.

It was also common practice for visiting Romans to conflate local gods with Roman ones. This meant that they assumed that gods were the same across the world, but were known by different names; hence Lugus of Luguvalium (Carlisle) was often associated with the Roman Mercury, and Cocidius, who was strongly located with Bewcastle, was conflated with the Roman Mars, amongst others. Perhaps our hoodie, then is <insert celtic name> Telesphorus. 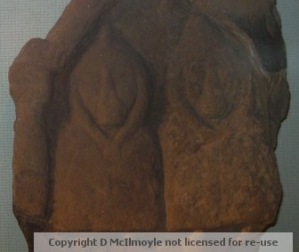 The surviving two genii cucullati from three. Found in Carlisle.

The clue to the local, British/celtic origin of this genius cucullatus is the fact that they’re more often found in groups of three than as a single figure. There are other native gods where we have a decent understanding of their triplicity; each figure represents a different characteristic, or power, of the single being. Brigid, for example, was a goddess of childbirth, a mother, and goddess of prosperity.1Perhaps one day we’ll find a triple genius cucullatus with symbols to make clear his role in life 1800 years ago. In the meanwhile, I quite like him, don’t you?This statue, and other similar ones, is on display at Tullie House Museum in Carlisle.

NB. I had permission to take these pictures at Tullie House Museum, Carlisle. Picture are my copyright. Please don’t pinch them.

This paper, prepared for a genius cucullatus exhibition at the University of North Carolina in 1998, was very useful. http://www.unc.edu/~css/Exhibition_paper.html

18 thoughts on “The genius cucullatus, or the Original Hoodie”